LLPD is an abbreviation that stands for “Line Lightning Protection Device”, and it represents a group of high voltage apparatuses based on a brand-new technology for the protection of overhead power lines against lightning impact.

What are the key features of LLPDs that distinguish them from conventional ways of protecting overhead lines against lightning strikes?

The operation principle of LLPDs is based on the energy dissipation process, which grants this range of devices one of their key benefit – the ability to withstand powerful direct lightning strikes. This is possible because, unlike conventional surge arresters, LLPDs do not absorb the enormous energy of direct lightning strikes. When LLPDs encounter a massive lightning impulse, their EasyQuench system operates and dissipates the energy of the lightning-caused overvoltage into the ambient air. Some part of the energy is diverted to the ground though, but the most important thing is that during operation the product is not damaged by the energy which is stored in the overvoltage.

What is the guaranteed life expectancy of LLPDs?

How are LLPDs grounded and what grounding impedance is required?

LLPDs do not require any special grounding unless they are installed next to transformers. In such a case, it is highly recommended to provide at least 10-30 Ohm.

Why and when is it recommended to use LLPD's instead of line surge arresters?

LLPD are characterized by the ability to withstand powerful lightning strikes thanks to the special EQ system, therefore it is highly recommended to use them along the whole line for protection against insulators flashovers and power supply interruptions/outages, and replace any conventional line surge arresters that are installed on the line. The only application that is not yet covered by LLPD – protection of equipment, such as power transformers or cable joints.

Is it necessary to install an LLPD on every phase insulator at every tower?

In order to achieve the highest possible effect (i.e. the maximum degree of protection of a line), it is recommended to install LLPD on every pole/tower.

However, in case of a limited budget special calculations can be carried out to develop the most efficient way of LLPD deployment on the line. Quite often, there are some specific sections that are much more subjected to lightning strikes and are responsible for the majority of outages. By equipping them, most of the issues can be cleared. Streamer has developed special software that can help run necessary calculations and simulations in order to propose the most suitable solution depending on the available budget, goals as well as line parameters, ground flash density, terrain profile, footing resistance.

Here are general recommendations on the protection of poles having good natural or artificial connection with the ground:

Alright, I have got a limited budget, but I would like to try some LLLPDs. Which sections of the line should be protected first?

The following areas should be primarily considered when choosing the proper section where LLPDs to be deployed:

Normally, those sections of the line that are located in the mentioned above areas are accountable for the majority of lightning-caused outages. By protecting them it is possible to eliminate most of the outages. However, the degree of outage reduction strongly depends on the quality of the input data and the way the data is processed, therefore it is reasonable to use specialized software to analyze the optimal way of placing LLPDs along the line.

Can an LLPD be installed on an existing line without the need to change out insulators or mounting hardware?

Absolutely. There are plenty of brackets and fittings that make it possible to install LLPD on virtually any pole without the need to change anything in the initial line design. Even if there’s some very specific tower or line insulator, a team of highly skilled and experienced design engineers will be available to develop a required bracket quickly.

Why do I need to set an air gap between LLPDs and conductors?

The operational concept of LLPDs implies the introduction of a series air gap that prevents aging of the product’s material like for those products that are directly connected to live conductors. As soon as there is no direct connection to the conductor, there is no leakage current along the surface of the product and thus no risk of a flashover along its surface.

Every air gap value has a minimum and maximum value. This happens because the whole system that includes both a series air gap and an LLPD must ensure reliable operation under power frequency voltage of the network where the product is installed, as well as provide so-called insulation coordination being operation of the LLPD faster than the line insulator which it protects from a lightning-caused flashover.

Thus, if the air gap value will be set smaller than the minimum recommended values, there might be some unexpected and undesired arcing under power frequency voltage. If for some reason the air gap value is too big, the product might not be able to ensure reliable operation with the current type of line insulator when the line is subject to lightning-induced overvoltages.

Normally, the air gap value range is indicated both in the LLPD catalogue and Operating Manual of the particular type of LLPD.

Usually, there is a certain range of the air gap values for different line voltages and types of insulators, so the best approach is to set the gap equal to the mid of the range. However, it is totally fine to make it a bit smaller or bigger as soon as it is within the recommended range.

What happens if a bird bridges the air gap between an LLPD and a conductor?

Nothing happens since apart from the main air gap there are plenty of small air gaps inside every device. They are enough to avoid issues under operating voltage when a bird bridges the main air gap. However, this is valid for relatively short events (such as a bird bridging the gap), that is why it is still important to keep the gap within the required range of values.

What kind of lightning impact can an LLPD protect from?

Speaking about a lightning impact on an overhead line, we need to distinguish two main types of it: a direct lightning strike which occurs when lightning hits directly some specific part of the overhead line, for example, a pole/tower, an overhead shielding/ground wire or just a phase conductor, and an induced overvoltage which appears on the conductors of a section of the line when lightning interacts with some objects in the immediate vicinity to the line, such as trees, houses, telecom towers, or simply ground. LLPDs are designed to mitigate deleterious consequences of both types of lightning impact on overhead lines.

These two phenomena are quite different in terms of main physical parameters, such as voltage, current, energy. A typical direct lightning strike is an overvoltage having the following parameters: 30 kA current and 6 MV voltage; when it comes to induced overvoltage, its voltage can hardly exceed 300 kV.

What is a typical LLPD maintenance procedure?

No tests and check-ups are required neither before the installation nor during the operation of Line Lightning Protection Devices (LLPDs).

However, it is recommended to conduct a visual inspection of LLPDs once a year during a regular inspection of the overhead line equipped with LLPDs.

When a visual inspection is carried out, the following aspects should be considered:

• The mutual position of adjacent components of LLPDs (for example, upper and lower rings) — if there is a displacement, it should be corrected, and the components should be securely fixed in the proper position

Also, a check-up of bolted joints of LLPDs’ components to composite insulators and brackets should be carried out during the overhead inspection. If possible, replacement of triggered one-time operation indicators should be conducted as well.

Are there any peculiarities when it comes to the protection of poles with naturally high BIL (composite or wooden) against lightning impact using LLPDs?

First of all, it is necessary to highlight that induced overvoltages are not an issue for such kind of poles, since their amplitude (≤300 kV) will not exceed the basic insulation level of the system “insulator + cross-arm + pole”, therefore no phase-to-ground fault are possible, as well as of the system “insulator + cross-arm + insulator”, so no phase-to-phase faults are possible either. Thus, the only thing that should be considered in case of nearby lightning strikes, that create induced overvoltages on the line, is traveling waves that could damage surge arresters installed at the terminals of pole-mounted transformers or at the entrance of a substation.

If a line on wooden or composite poles is subjected to a direct lightning strike, the overvoltage’s amplitude will be high enough to exceed the basic insulation level of both system “insulator + cross-arm + pole as well as system “insulator + cross-arm + insulator”, but for the first case, there are still no permanent faults because the power arc will not be able to sustain burning. As for the second case, a flashover will result in a power outage. In addition, traveling waves will keep on propagating along the line and may reach vulnerable apparatuses such as pole-mounted transformers or power transformers at substations. If they are protected with surge arresters, the last are highly likely to get damaged by the enormous energy of the traveling waves.

To sum up, here are the hints on the utilization of LLPDs for poles with naturally high BIL:

Are there any limitations that are critical for the proper performance of LLPDs?

Since the operational principle implies an interruption of the power frequency fault current that appears on the line immediately after the lightning overvoltage, when placing LLPDs it is extremely important to make sure that the level of the fault current in the location of installation is below the maximum permissible value. LLPDs that are meant exclusively for the protection of overhead lines against induced overvoltages (so-called i-LLPDs) will ensure designed performance only for those sections of overhead lines that have fault current level below 1.5 kA.

LLPDs that are meant for both direct lightning strikes and induced overvoltages (so-called d-LLPDs) this maximum permissible level is higher – 5.0 kA.

Below you may find a simplified selection chart for your convenience. 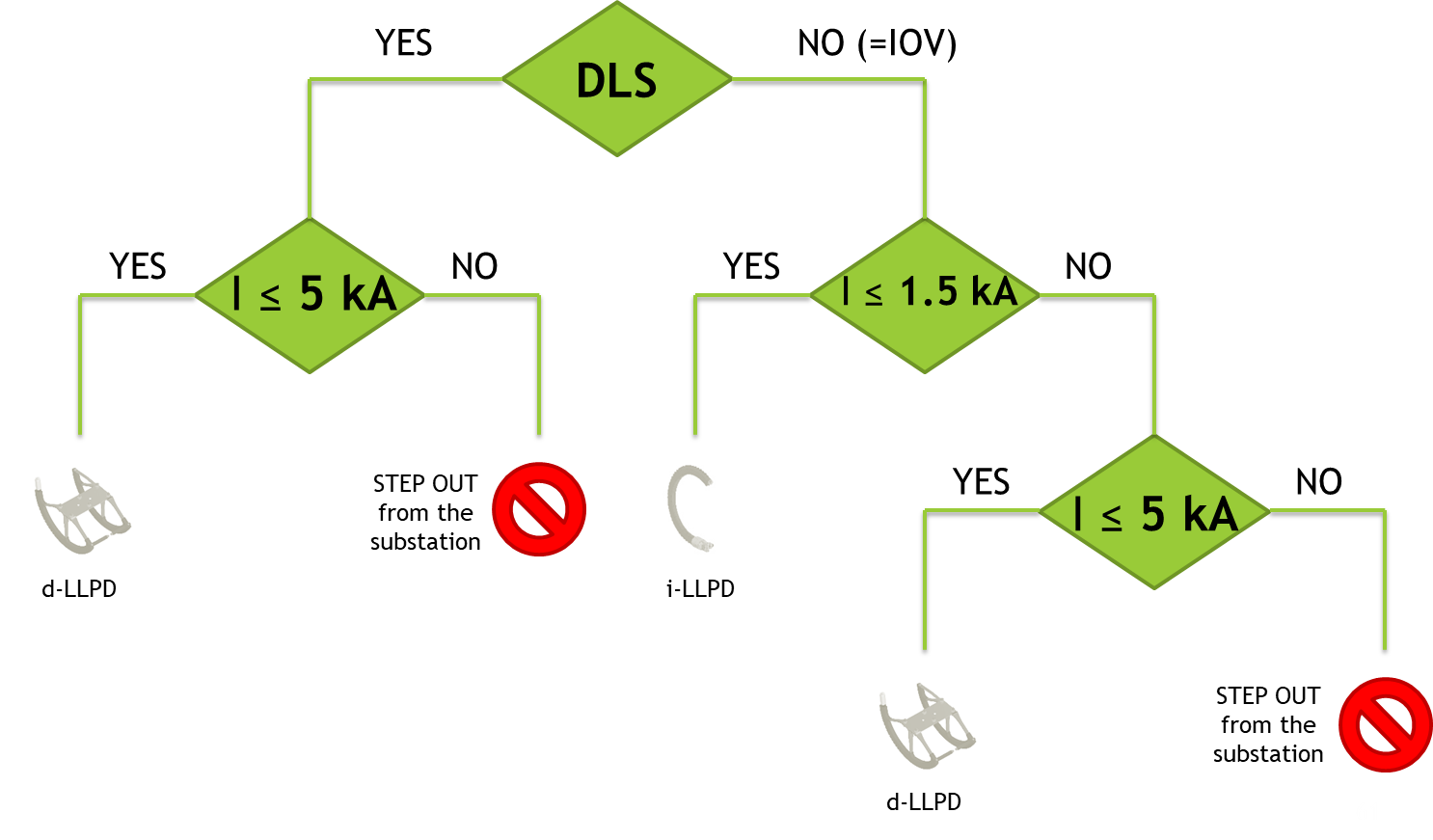