Streamer summed up participation in the Polish exhibition ENERGETAB 2019

23.09.2019
Streamer took part in ENERGETAB 2019, the largest exhibition of modern power machines, equipment, and technologies in Central Europe, on September 17-19. The event took place for the 32nd time in Bielsko-Biala, Poland.

The leading representatives of the energy sector from all over the world met each other in the ENERGETAB 2019. The exhibition program announced several hundreds of exhibitors from more than 20 countries in Europe, Asia, and the USA. Among them, there were widely-known international corporations and domestic companies of Poland manufacturing equipment that ensures a reliable and efficient power generation and distribution.

An event of strategic importance for our company was represented by Igor Shestak, the Business Development Director, and Nikolay Barsukov, the Product Develoment Manager, in Bielsko-Biala.

Nikolay Barsukov talked about our participation in more detail: “ENERGETAB is an event of strategic importance for Streamer for two reasons.

First of all, the exhibition organizer is ZIAD Bielsko-Biała SA, the Power Technical Development Center. This organization has been operating for more than 30 years and is known beyond the bounds of Poland. The Center has ample territories where the exhibition was accommodated. 14 pavilions and more than 650 participants. This is one of the few events of such scale in this country. Besides, representatives of the electric companies from the South of Poland - TAURON, ENERGA, and PGE, our target clients, also attended the exhibition.

Secondly, the Center held a power conference Energo Rodeo this June where we made a report on the lightning protection technology which is innovative for the Polish market. Consequently, participation in the exhibition became a logical continuation of our relationship with ZIAD Bielsko-Biała SA Center", - he says.

The exhibition occupying over 35 thousand sq. m is traditionally visited by scores of people. It was held in several locations this year - in a newly built modern exhibition hall, in pavilions and on an outdoor platform where the largest and heaviest showpieces were placed. The exposition was covered all energy areas, namely, electric engineering, industrial electronics, power generation and supply, etc.

According to Nikolay Barsukov, the uni-vocal advantage of this event was the audience which could be interested in the production of Streamer. Apart from electric companies, local manufacturers and distributors of electric equipment took part in the ENERGETAB.

"We feel pulse of their interest in our equipment, we investigate the market. Many companies see the potential of Streamer's solutions and wants to know more about the products. Others have some doubts, because there are no individual standards for EasyQuench lightning protection devices in Poland as well as in the European Union as a whole, while the electric energy field is one of the most conservative industries. This is precisely why it is so important for us to spread the product information to a maximum extent, to present the product to the greatest number of market players, and to create a certain information field", - the Product Development Manager continues.

Do not save on image

The delegation from Streamer visited Bielsko-Biala town for the II National Power Engineering Conference Energo Rodeo in the beginning of summer. This time, it was decided to engage a Polish interpreter to take part in the exhibition. As it was noted by Nikolay Barsukov, representatives of domestic companies perceive the same information in a totally different way if it is provided in their native language. Moreover, an interpreter acts as a front man for the company, that is why it is very important that his/her appearance and communicative skills are at a very high level. That is to say, we should not save on the company image.

"Polish companies adhere to the same philosophy. Almost all large players of the domestic market had thematically decorated booths, racks with models of equipment, special promotion staff whose duty was to meet and redirect visitors to the specialized professionals of the company, refreshments and promotional gifts. Generally, the Poles pay much attention to a strive for keeping up appearance. It's an interesting fact that Chinese companies attended the exhibition as well. Not as much as in the Russian exhibition, but they were quite noticeable though", - says Nikolay Barsukov.

A large manufacturer of fixtures for overhead lines in Poland took an interest in the Streamer's production in the Energo Rodeo in June. The negotiations with this company are currently under way and the nearest meeting is planned for the end of October. Presently, we have new information concerning requirements to certification in the territory of Poland and position of electrical companies, therefore the negotiations become more and more specific", - concludes Nikolay Barsukov. 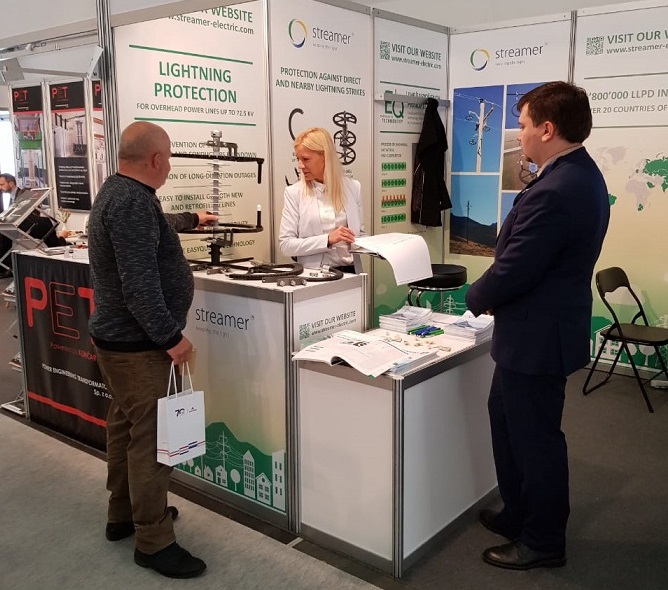 Streamer met with its old friends over the world - it was a nice and warm event, the first big one after the Covid times. CIGRE was also very useful in setting up new cooperation opportunities, mostly in the European region.

In 2019, the University of Napoli contacted Streamer Electric AG in order the find a lightning protection solution for medium voltage lines. Prof. Amedeo Andreotti was looking for medium voltage line protection devices for E-Distribuzione, the Distribution utility of Italy, part of the ENEL group owner of the electrical network in Italy but also many other electrical networks around the world. E- Distribuzione is actively looking to improve the lightning outage rate on their overhead line network and particularly in the northern part of Italy.

The adventure has started with training the linemen who will be later mounting the LLPDs on the power line. In total, it was five teams with eight workers in each. We held a practical workshop at Pampanga Substation's warehouse. During the training, we presented the principle of LLPD – the EasyQuench system and focused on the features essential for the installation and maintenance crew.
Read more
22.02.2021

In this chapter, you can find the Frequently Asked Questions on LLPD, inspired by our customers. We hope that the comprehensive answers will be useful for anyone interested in the lightning protection of overhead lines.
Read more
04.02.2021

Prior to the large tender awarded by TNB to Streamer Electric AG, we conducted on-site trainings for the LLPD dM35z installation. The purpose of this activity was to educate the end-user personal for proper installation of LLPDs and selecting the most suitable accessories for each tower. The onsite training was conducted in four different cities: Selangor, Johor, Perak, and Kedah.
Read more
01.02.2021

In the beginning of December, we took part in the Latin American exhibition FISE (Feria Internacional del sector eléctrico) - the International electrical equipment fair. This is an industry event where the leading companies in electric power and related sectors meet.
Read more
29.11.2019